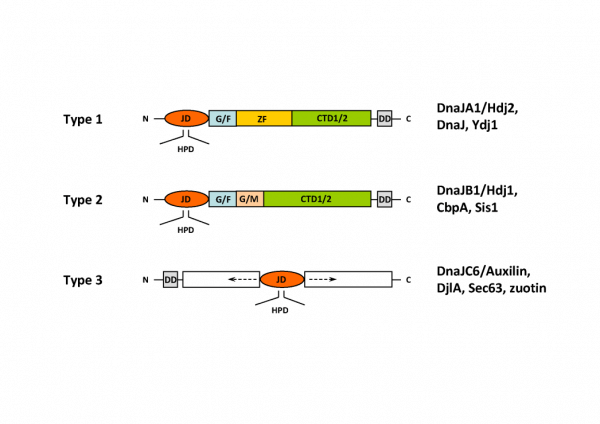 Most data on structure and function of DNAJs/HSP40s have been raised for E. coli DnaJ. The members of the DNAJ/HSP40 family are all characterized by the presence of the highly conserved J-domain (Figures 1+2). The J-domain which was named after the founding member, the E. coli protein DnaJ, is about 70 amino acids in length consisting of four α-helical regions and a loop region between helix II and III (in antiparallel orientation) harboring the conserved HPD tripeptide as the signature motif 32, 52, 53. Six highly conserved residues at 19, 27, 44, 50, 51, and 54 are thought to stabilize the J-domain 8. Helix II has a charged surface due to the presence of at least one pair of basic residues and helical wheel projections playing an essential role in the interaction with the ATPase domain of HSP70s 166. Further amino acid residues in helix II constitute a completely closed face when DnaJ is complexed with Hsp70 55. Recruitment of Hsp70 leads to the formation of a loop in helix II reducing the flexibility of the J-domain and thus its conformational variability 167. With a few exceptions, the J-domain is localized at the N-terminus. In recent years a wealth of evidence has been collected to demonstrate that the HPD motif within the J-domain is responsible for the regulation of the ATPase activity of HSP70s 1,2,3,4 as it forms an interface with the Hsp70 ATPase domain in conjunction with certain amino acid residues in helix II 167. Adjacent to the J-domain is an unsystematic Gly/Phe (G/F)-rich region obviously accounting for the flexibility of the molecule 51, 168. In DnaJ, this region comprises approximately 34 amino acid residues that are highly conserved among type 1 DNAJs/HSP40s and more variable in type 2 family members. Evidence has emerged that the G/F-rich region is responsible for the functional diversity of certain DNAJs/HSP40s 169,170,171,172.
Figure 2.  (click image for larger version)

A representative characteristic of type 1 DNAJs/HSP40s is the existence of a central Cys-rich region consisting of four repeats of the ZF motif CXXCXGXG 47, 48, 65, 66. Structural data raised by different groups imply that the four CXXCXGXG sequence motifs function in pairs with each pair binding a single zinc ion thereby forming a novel fold with an V-shaped extended β-hairpin topology 65, 174. According to Martinez-Yamout et al., the conformation of the Cys residues coordinated to the zinc ion resembles that of the rubredoxin-knuckle, but there are significant differences in hydrogen bonding patterns in the two different zinc-binding motifs 174. Of note, the V-shaped groove is obviously implicated in protein/protein interactions as ZF domain-containing DnaJ fragments have been demonstrated to interact with denatured, non-native proteins 47.

The crystal structures of the CTD of Sis1 and Ydj1 revealed that they are composed of two barrel topology subdomains, CTD-1 and CTD-2 (Figure 1) 65, 114. CTD-1 contains a hydrophobic depression that might be involved in binding the sidechains of hydrophobic amino acids in type 1 and type 2 DNAJs/HSP40s 65, 66, 114, 175. It should be noted that the primary sequence of CTD-1 in type 1 DNAJs/HSP40s harbors amino acid stretches upstream of the ZF domain 6, 65. To what extend CTD-2 contributes to the specific function of DNAJs/HSP40s remains unsolved up to date. Structural analyses of the Ydj1 peptide binding fragment and its peptide substrate complex illustrated that the Ydj1 peptide-binding fragment exists as an L-shaped molecule in which the shorter arm is formed by the ZF domain 65.

The extreme C-terminus possesses a dimerization domain which functions in enhancing affinity for client proteins 67. A small angle X-ray scattering study revealed that DnaJ is a distorted omega-shaped homodimeric molecule with the C-terminus of each subunit forming the central part of the omega 113. The dimer formation is critical for DnaJ/Hsp40 molecular chaperone activity to facilitate Hsp70 to refold non-native polypeptides. Dimerization occurs through the C-terminal residues (331-376) resulting in the formation of a large cleft constituted between the two DnaJ monomers 113. The interaction between the two subunits may occur in different ways: firstly, the 331–376 amino acid stretch from each of the subunits may interact with each other; and secondly, this stretch on each submit may interact with another part of the other subunit, as can be found in yeast Sis1 114 and Ydj 65, respectively. From these findings it can be concluded that the simultaneous binding of a non-native polypeptide to each monomer might ensure maintaining the transfer-competent form of the molecule 6. DNAJs/HSP40s showing a domain structure similar to that of E. coli DnaJ are designated type 1 DNAJ/HSP40 proteins. Type 2 family proteins bear the J-domain and the G/F-rich region, but lack the ZF domain, while type 3 DNAJs/HSP40s possess only the dimerization domain together with the J-domain not necessarily located at the N-terminus. Membrane-anchored DNAJs/HSP40s such as the type 3 family member DjlA from E. coli harbor a TMD. In DjlA, the TMD is located at the N-terminus and functions as a dimerization domain 119. Dimer formation is a crucial event in DNAJ/HSP40 chaperone function and has been demonstrated not only for prokaryotes but also for lower and higher eukaryotes. In this regard, the crystal structure of the peptide-binding fragment of Sis1 from S. cerevisiae confirmed that Sis1 forms a homodimer in which the monomers are elongated and consist of two domains with similar folds 114. It was also found that dimerization occurs through a short C-terminal stretch. The Sis1 dimers have a U-shaped architecture with a large cleft between the two elongated monomers. Moreover, the first domain in each monomer has been identified to harbor a hydrophobic depression that might be involved in binding the sidechains of hydrophobic amino acids typical for denatured polypeptides. A similar crystal structure was found in the peptide-binding fragment of human DnaJB1/Hdj1 with the exception of a smaller cleft between the single monomers (Figure 3) 176. In the latter, a polar residue, His166 is involved in forming the peptide-binding site which is different from the hydrophobic peptide-binding depression in Sis1. These observations indicate that the first domain of DnaJ/Hsp40 may possess significant flexibility assisting DNAJs/HSP40s to regulate the size of the cleft within the homodimer 176.

The same group determined the crystal structure of the peptide-binding fragment of type 1 DNAJ/HSP40 Ydj1 from yeast complexed to its peptide substrate and found out that the Ydj1 peptide-binding fragment forms an L-shaped structure composed of three domains in which domain I exhibits a similar protein fold as domain III while domain II contains two ZF motifs 65. The authors clearly demonstrated that the peptide substrate interacted with Ydj1 by forming an extra β-strand with domain I of Ydj1. It is worth mentioning to highlight the presence of two ZF motifs and a β-hairpin within domain II of Ydj1 forming the shorter arm of the L-shaped structure. Notably, the ZF motifs constitute an orthogonal turn between the two arms of the L-shaped peptide-binding fragment in Ydj1 65. Consistent with this observation, the ZF motifs in E. coli DnaJ have been shown to form a V-shaped molecule 174.

When comparing the structure of dimeric type 1 DNAJ/HSP40 Ydj1 with that of the dimeric type 2 DNAJ/HSP40 Sis1, Sha and colleagues identified a large cleft present in each homodimer as being the putative docking site for Hsp70 64. Despite a similar folding topology in both molecules, Ydj1 bears two ZF motifs at the bottom of the shorter arm not present in Sis1. A further difference relates to the quaternary structure of the homodimers. While the single monomers of Ydj1 are arranged in one plane, the Sis1 monomers do not fit in the same plane 64. In contrast to Sis1, Ydj1 bears a longer dimerization motif at the C-terminus facilitating more intermolecular interactions thus enhancing our understanding of the molecular mechanisms responsible for the various functions of DNAJs/HSP40s. For further detailed information see work by Bingdong Sha and collaborators.